NOTE: If you're using passwords in shell scripts, see Daniel Jalkut's reply below about using OS X's built-in security command instead of his AppleScript library.

One of my goals for the new year1 is to be more security minded in my use of technology. This is a broad statement, but I have some very specific points in mind, including more regular use of a self-hosted VPN (the topic of a future blog post) and avoiding the bad habit of using passwords in shell scripts (the topic of this blog post).

The use of security credentials, such as a password, is an integral part of life with technology. For those of us who like to automate things, the need often arises to supply such credentials in a script. The simplest, and least secure, way to do this is to enter the password in the script in plain text form. Having done this myself and seen countless other people who are way better at this automation thing than me do the same, I know it is easy to do. I'm certainly not here to lecture anyone about best practices, but there is another option and it's not that difficult to use. This method involves a little AppleScript and Daniel Jalkut's excellent utility, Usable Keychain Scripting, with the latest version available here. I don't see much mention of Usable Keychain Scripting online, so I thought a tutorial would be a handy way to start the new year.2

Daniel's blog posts explain his personal motivations for writing and updating Usable Keychain Scripting, but I first discovered the application when Apple removed keychain scripting from Lion, thus making it impossible to access keychain entries with AppleScript. His utility fills that niche for me, though as mentioned, I don't use it as often as I should.

The general idea is to create a specific keychain entry with a title and password in one of your keychains using Keychain Access3. Then the password contained in this entry is accessed using the AppleScript library provided by Usable Keychain Scripting. AppleScript can be called from many languages, including the shell, thus allowing the password to be retrieved when needed.4

The first step is to create a password entry in Keychain Access. The main consideration here is that although multiple keychain entries can have the same name, it's difficult (and more work) to distinguish between them in an AppleScript. Thus, it's best to ensure the entry has a unique name.

Here's an example I created to mount the partitions on our Drobo, called KUPHOG-NAS:5 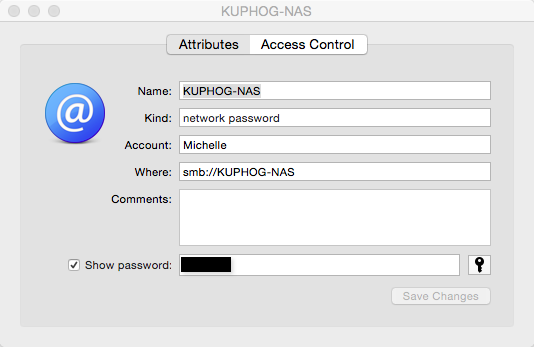 Then the Usable Keychain Scripting AppleScript library should be tested within Script Editor. This is important because your login password has to be entered the first time this AppleScript library is accessed, and the password entry window doesn't always work from a shell script.

Here's a sample AppleScript that accesses the password created for the Drobo above:

As is probably obvious, this password was created in the login keychain for my account in Keychain Access. When this is the case, a simpler alternative can also be used:

When either of the AppleScripts is executed, the desired password will be returned. This indicates everything is working: 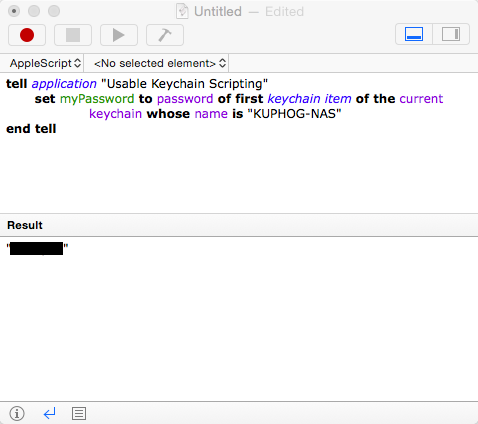 The last step is using your new toy in a shell script. Continuing with the Drobo example, here's how to mount a drive partition from the command line: